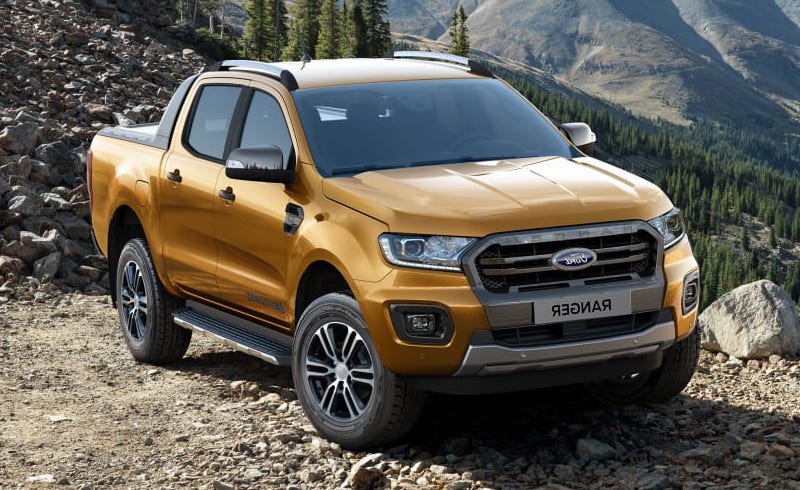 The new Ford Ranger pick-up is available with a range of body types, all boasting a robust build. It’s highly practical too, as it transports massive loads over long distances with ease. Better yet, with our exclusive Ford Ranger deals, you will benefit from our price-match promise and unrivalled customer service.

In terms of versatility, the new Ford Ranger covers all the pick-up truck variants with three body styles: the single cab, the extended Super Cab and the full-size Double Cab. No matter which Ford Ranger model you choose, the cabin is spacious and well laid out. It also offers plenty of state-of-the-art tech as standard.

Under the bonnet of the new Ford Ranger, you have the choice of two lively engines: a 2.2-litre diesel and a 3.2-litre unit that both supply notable levels of power while remaining surprisingly fuel-efficient. Buying a new Ford Ranger is a cost-savvy investment, as the van is affordable to run and you can often find good discount deals and offers. The new Ford Ranger is also the only pickup to get the full five-star crash safety rating from Euro NCAP.

Overall, the fresh facelift of the new Ford Ranger has resulted in fantastic versatility, exceptional levels of power and an amazingly complete driving experience. To get the best Ford Ranger deals at the best price, browse and buy online from Nationwide Cars.

Select your model below, or contact us if you need help.

Ford's practical pickup is as spacious as you would expect, while offering a number of different cab choices. The Regular Cab has the largest carrying capacity, with a maximum load length of 2,317mm. The Double Cab, on the other hand, has three rear seats, meaning that the Ranger can be used as a more family-friendly vehicle, although does mean that the load-bed length is reduced to 1.5 metres.

The pick-up Ford Ranger also boasts plenty of interior storage space, while there are a large range of accessories that let you adapt the truck to suit your requirements. For example, you can opt for a hard-top cover, bike carrier or manufacturer-fitted tow bar. The new Ford Ranger also excels with its towing ability. Models with a 3.15 final drive ratio are able to tow a trailer weighing up to 1,800kg, while models with a 3.55 or 3.73 ratio can tow a 3,500kg trailer.

The new Ford Ranger is available with a choice of two power units, the four-cylinder 2.2-litre TDCi or a 3.2-litre five-cylinder TDCi unit. Note, however, that the latter engine is only available with Double Cab models, and does have a less efficient fuel economy when compared to the 2.2 litre.

Ultimately, the engine choice will depend on whether you're using the new Ford Ranger as a family vehicle, as the 2.2-litre will offer enough power for most people's needs. In general, the Ford Ranger is pretty cheap to run.

The Ford Ranger is able to give CO2 emissions of just 171g/km with the 2.2 TDCi models, although these have a reduced towing capacity (of 1,800 kg). These models offer the Ranger's best fuel economy of 43.5mpg.

The Ford Ranger is arguably one of the best pick-ups in terms of its drive. It's agile enough to navigate country lanes while also handling city roads, particularly with its electric power steering. As you would expect, it is very capable off-road too.

While standard models have plenty of tech, you can have a real class upgrade with the Limited model. This offers Ford's SYNC2 voice control and touchscreen technology, which has a bigger screen and better menu system in comparison to the SYNC1.

The new Ford Ranger really stands out in terms of safety and reliability. In its original form, it achieved a full five-star Euro NCAP rating - the first pickup to achieve this. It boasts a strong construction, so it's no surprise that it is particularly tough and durable.

There are also a range of additional features that can be had to improve safety even further. Electronic stability control is fitted as standard, while the Double Cab models have a number of child-friendly safety features, like ISOFIX child seat mounts and childproof door locks. For off-road driving and towing, the pickup benefits from Load Adaptive Control, Roll-over Mitigation and Trailer Sway Control.

To upgrade safety even further, you could opt for the Ford Ranger Driver's Assistance Pack'. Costing around £1,125, this adds advanced features like Lane Keeping Aid, Traffic Sign Recognition and Collision Mitigation.

The new Ford Ranger has an upmarket, sturdy and spacious interior. While not as tactile and ergonomic as some SUVs, the Ford Ranger is built to be tough rather than pretty.

As standard, you get some useful technology features like the Easy-Fuel system, a DAB digital radio and heated electric mirrors, while an XLT upgrade adds air-conditioning, rain-sensing wipers and cruise control. The top of the range Wildtrak version adds even more, including coloured, ambient interior lighting.

Colour scheme is probably less of concern with a vehicle like the Ford Ranger, where you'll likely want to opt for a dark utilitarian shade. You can go for the solid Frozen white paintwork or, instead, choose a metallic finish of Moondust silver, Panther black, Sea grey or Pride orange.

For the best offers and deals on new Ford Ranger vans, browse Nationwide Cars’ Ford vans collection or contact us for more information on buying your Ranger online.

Stuck? Request a call back and let us help you.

Looking for Something Else?